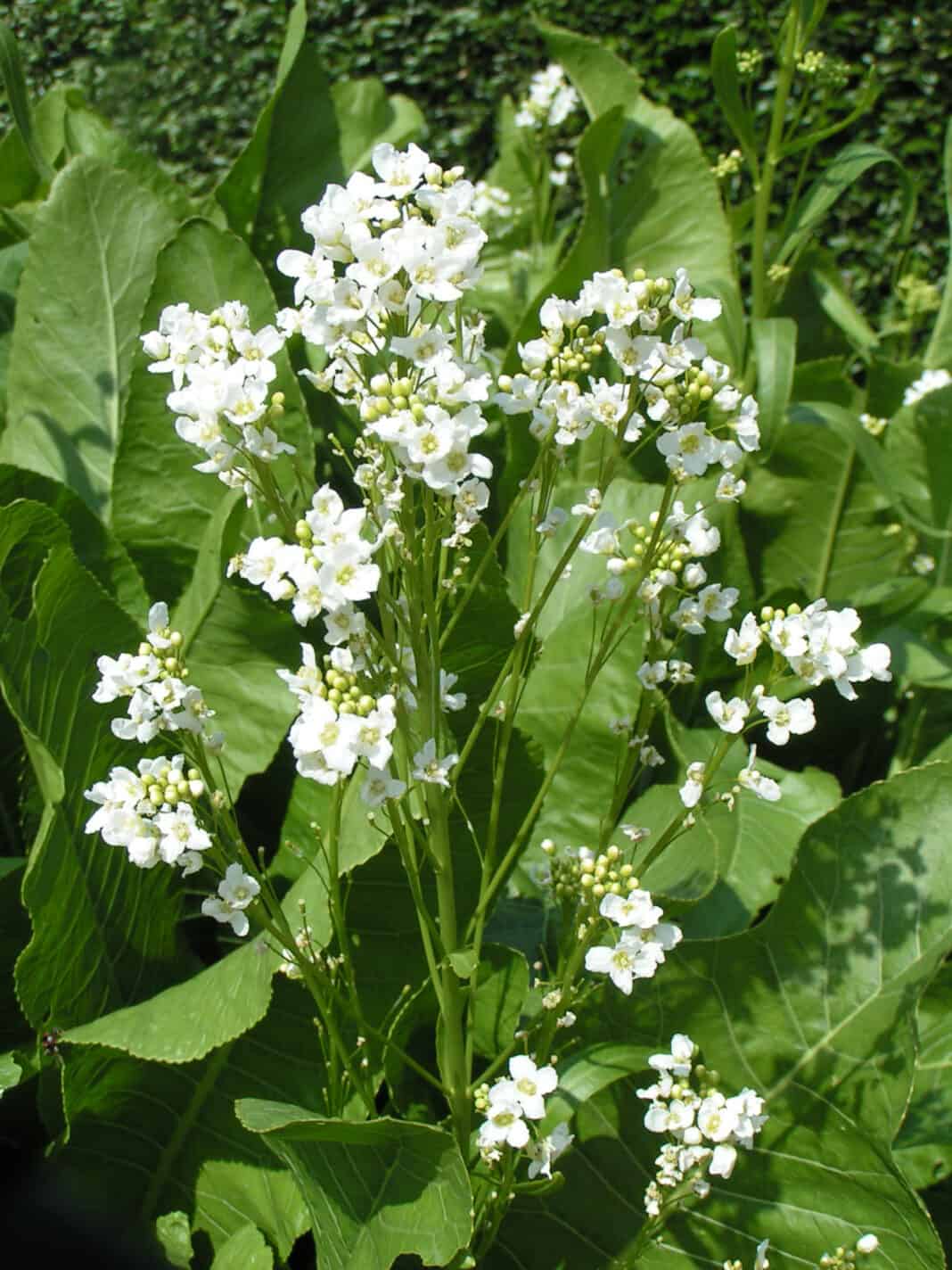 Horseradish occupies an important place in medicine and nutrition. Since ancient times horseradish was considered an exceptional medicinal plant, being inserted into some pharmacopoeias. The bitter herbs of the Last Supper are sometimes symbolized by Easter by a single food: horseradish.

The horseradish root has stimulant properties. Between exciting, stimulant and irritant is only one step, depending on the amount of horseradish we ingest. Exceeding moderate or average doses, we can reach undesirable effects, such as, irritation of the parenchyma of the kidneys, gastrointestinal mucosa and nervous system.

Horseradish is contraindicated for people suffering from hemorrhoids, hemoptysis, heart rhythm disorders and congestive states. To a lesser extent the leaves are also used, being a good natural preservative for pickles.

Traditional medicine, recommends horseradish as an adjunct in heart disease, ischemic cardiopathy, angina and hypertension. The horseradish excites the mucous membranes and intensifies salivary and gastric secretions, being aperitif tonic and gastric stimulant in anemias, lack of appetite as well as in hypoacid gastritis. Horseradish has a marked diuretic effect, being successfully used in hydropsy, gout, rheumatism, having an antilithiasic effect. Not recommended in acute kidney disease.

Horseradish is also used in respiratory therapy, such as asthma and bronchitis. As an antiparasitic, horseradish has a remarkable tenefuge action. Freshly grated, externally used horseradish has revulsive properties. External applications with horseradish, relievejoint inflammation, rheumatic neuralgia, intercostal and dental neuralgia, even helping to combat migraines.

Horseradish is used in acute bronchitis, pneumonia and flu. By the revulsive effect, through the influx of blood to the gums, can be a precious adjuvant in paradontosis. Due to the antiseptic effect, it is recommended in oral hygiene, in the form of mouthwash. It is also recommended in the fight against frostbite and in cosmetics is a good remedy against freckles.

Horseradish can be consumed as such for seasoning dishes and to combat tapeworm it is recommended to be added to salads alongside onions and raw fruit. Infusion of 15-20 g per liter of water, leave to macerate 12 hours, take 2 cups a day between meals.

Tonic and antianemic wine. Macerate for 24 hours, 30 g of grated horseradish, per 1 liter of wine. Strain and take a 50 g glass before meals.

Syrup for anemic, lymphatic children without appetite. Cut the horseradish root into fine rounds, add sugar, and the juice that forms, is given to them one tablespoon a day.

Antireumatic adjuvant. To 1/2 hot milk, add 2 tablespoons of grated horseradish and leave to macerate for one hour. It is drunk in the morning, being excellent in relieving rheumatic pain.

Ischemic cardiopathy, angina, hypertension. Make a cure with horseradish and honey. A spoonful of grated horseradish, with a spoonful of honey, is homogenized and taken gradually, with a teaspoon, in the morning one hour before breakfast. The cure lasts 30 days, repeating itself with breaks of two months, 4 times a year, for 3 years.

Bronchitis, flu and pulmonary congestion. Make poultices with shaved horseradish that are applied to the thorax.

Rheumatism and inflammation. Make local or general baths with horseradish flour (or mustard flour), holding the flour in a gauze case over which pour warm water of 25-30 degrees Celsius. Calculate one teaspoon with a tip per liter of water. The save is shaken in water, and the bath lasts 25-30 minutes.

Rheumatism. Fry the area with horseradish tincture. Make a mixture of 20 g shaved horseradish and 100 ml alcohol and leave to macerate for 2 weeks.

Previous articleSlim and full of energy?
Next articleHow to get rid of wrinkles with natural botox

Apple the tree of life

Flowers, the symphony of spring fragrances