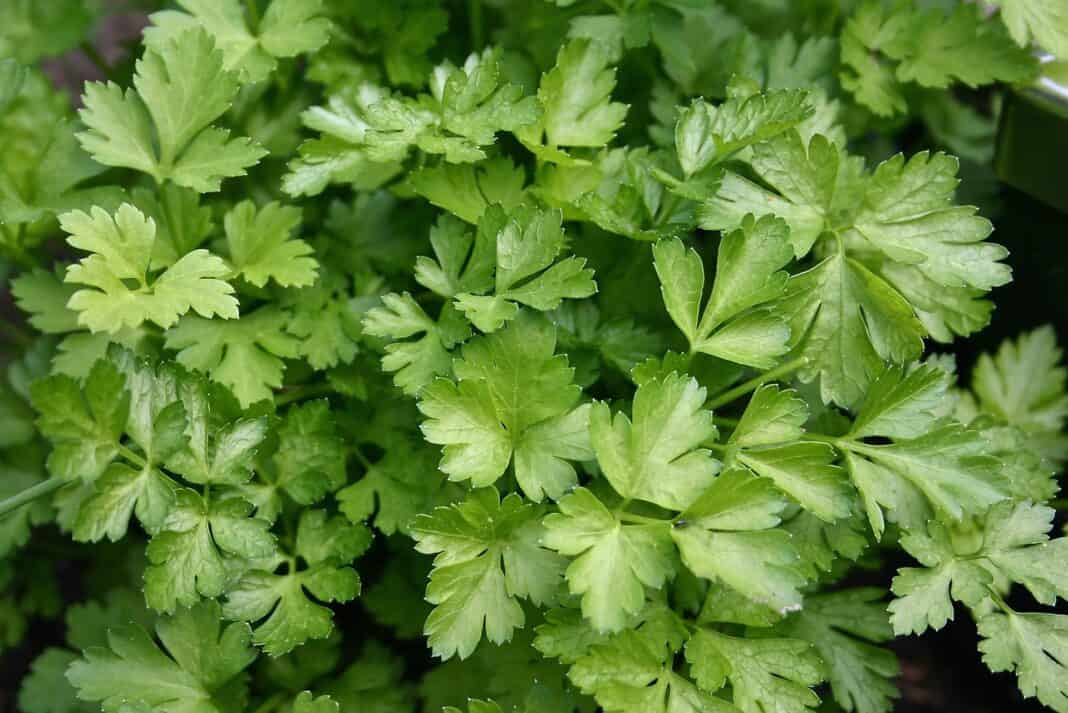 The unmissable parsley in the kitchen

Parsley is a rich source of vitamins, minerals, antioxidants and fiber, excellent for maintaining the health of the body. Parsley was part of the ceremonial food of the Jewish Easter and was regarded as a symbol of new beginnings, as it is one of the first plants that spring rises.

The main constituents of parsley

Parsley contains volatile oil in the aerial part, especially in seeds, consisting of apiol, myristicin, allytrametoxybenzene, terpenic carbides, coumarinic derivatives, etc. The seeds also contain about 20% fatty oil consisting of unsaturated fatty acids, which contain petroselinic acid and a flavonic heteroside, apiside. It should be specified that the seeds are contraindicated for internal use.

Parsley is rich in vitamin A, B, C, E,manganese, iron, calcium, magnesium, phosphorus, potassium, sodium, sulfur and iodine. Parsley contains histidine, an amino acid that can slow the development of tumors.

Internally,parsley is recommended in the detoxification belts of the body, favoring the elimination of toxins through sweating, neutralizing the harmful effects of tobacco and alcohol consumption. After a 2-3 week course of parsley, the whole body will work better, we will be more energetic and in shape.

Parsley has feverish properties, and under the emenagogic action ratio, acts to regulate the cycle and relieves pain. It has diuretic-depurative properties, being recommended in diets for rheumatism and hyperuricemia ( gout ).

The parsley leaves are a general stimulant, antianemic and antirahitic, as well as a nervin tonic. The consumption of parsley stimulates and acts on the smooth muscles of the internal organs, being indicated in all cases of digestive atony of the gallbladder, with colagogue effect, as well as of the bladder, calming the colic of these organs.

Parsley also has an antihelmintic effect, which leads to the fight against oxides. On the circulatory system, has vasodilating action, also helping to regulate capillary circulation.

Externally,leaf juice combats neuralgia, even dental ones, having an anti-inflammatory effect. It is recognized as a very effective capillary tonic. In cosmetics, the leaves can be used for cleansing the skin and being a remedy against freckles. Due to the anti-inflammatory effect, parsley juice is also recommended in skin irritations, contusions, bruising, insect stings as well as in eye inflammations.

In the case of pregnant or lactating women, parsley straps are contraindicated, but may consume it in moderate amounts in prepared dishes. Parsley contains apiol a substance that induces uterine contractions and can have undesirable effects on the course of pregnancy.

Ways to use parsley

Parsley is consumed as such, in various salads or juices, in addition to various dishes, as an aperitif and stomahic tonic. Infusion of leaves, with a teaspoon per cup, 2-3 cups per day. Parsley is widely used in slimming dietsbecause it removes water from the body.

Against freckles, prepare fresh parsley juice, with which are made applications 2-3 times a day, for 15-20 days.

In the case of dental neuralgia,prepare a parsley juice, mixed with alcohol of 70 degrees in equal parts. Make poultices from this preparation and apply to painful places with a cotton swab, until the treatment of caries, which should not be postponed. This mixture can be stored in dark, cold bottles in places away from light.

For skin cleansing prepare a concentrated decoction of 2 tablespoons parsley leaves to a cup warm water. This decoction can also be used as a capillary tonic.

Why are nuts so valuable?

What milk do you choose?

What do you guys choose tea or coffee?

Flowers, the symphony of spring fragrances