8 Tips on what to do to get your plans moving

Forecasts for the Year of the Water Rabbit

Is money the answer to the problems you face?

Recipe of yellow curry with coconut

How to get Michelin Stars – Restaurants that unite the world

Restaurants that receive Michelin stars are considered to be of exceptional quality. This means that they have already reached the peak of culinary realization. One, two or three stars are awarded to renowned restaurants, a distinction sought after by gourmets around the world. For the first time in the world, a star was awarded to a very refined restaurant in 1926. Two and three stars were awarded in this system in 1933 indicating a “bakery worthy of a detour”. In 1900, the Michelin Guide was produced annually with the aim of helping drivers in search of mechanics, hotels and of course, decent restaurants.

The popularity of this scheme grew in the years that followed, and guides were created that were distributed in major cities around the world. In addition, the company hired renowned Michelin inspectors to do the rigorous testing expertise that made the Michelin Guide become the refined Bible of the present moment.

For the opening of a restaurant that hardens at Michelin Stars , a full evaluation of the place and service offered is required. Inspectors do not necessarily look at the interior décor, the décor of the table or the quality of service when awarding the stars. They are instead indicated by the number of ‘covers” he receives, represented by the fork symbol and the crossed spoon.

The evaluation of Michelin-starred restaurants is done through a unique system, but how much do we really know what the coveted stars mean? The Michelin Guide conveys the reviews of its restaurants through short summaries of two, three lines and an extensive system of symbols. Michelin stars can be obtained for the quality of dishes based on five criteria: the quality of the ingredients used, the mastery of flavor and cooking techniques, the personality of the chef in his kitchen, the quality-price ratio and consistency between visits.

How are Michelin stars awarded?

Unlike other rating systems, Michelin stars are not based on customer reviews, but on undercover inspections carried out by anonymous food experts, known as Michelin Inspectors. Inspectors shall remain anonymous in order to avoid preferential treatment. They attend official michelin guide courses, having gained experience in the field of restaurants. The Michelin star inspector must be passionate and know the food, have special attention to detail and have the ability to integrate with regular customers.
The judging criteria are the same for each restaurant, the emphasis is placed on the quality of the ingredients, on the cooking techniques and especially on the taste. Michelin stars are awarded only according to the standard of the kitchen, so inspectors will not take into account things such as the décor of the restaurant or the ambience when making the assessment. Comfort and quality are valued from 1 to 5 by the fork symbol and cross spoon.
Restaurant owners are not informed when the inspection will take place. Inspectors often return about three to six times before reporting to their fellow inspectors to make a joint decision about whether or not to award stars. A restaurant can be rated from 0 to 3 stars, but there is also a “Bib Gourmand” award, to locations that offer quality food at a reasonable price.
Michelin stars are awarded to restaurants rather than individual chefs, so chefs who run multiple establishments can own more than three stars. The record for most Michelin stars belonged to Joel Robuchon, who once owned 32 Michelin stars in total. Most restaurants do not comply with Michelin standards and therefore inspectors will award the distinction of zero stars.
Those who make the note are reinspected, but they can lose their stars if the standards have fallen. Even the most famous chefs like Gordon Ramsay, was deprived of stars for violating the strict standards of Michelin inspectors. Ramsay is said to have burst into tears when his Restaurant in New York was stripped of the Michelin stars, saying it was like “I lost my best friend.” Of course restaurants can try to regain in the coming years the stars lost in the Guide. The exact judging criteria are not known and that can sometimes be a difficult task for aspirants. 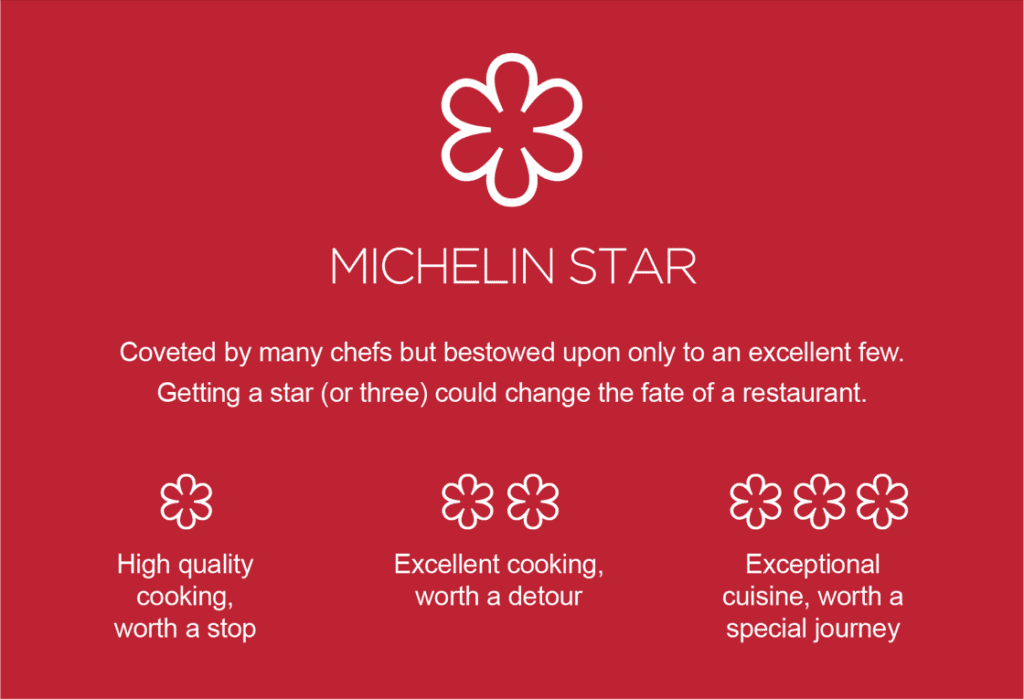 A Michelin Star means “high-quality cooking and is worth a stop. This may be the lowest prize, but it is still a big distinction that denotes a new cooking talent that could be one to watch in the future. Only a small fraction of restaurants around the world even own a Michelin Star. Currently the city with the most Michelin Stars, more precisely with 161 restaurants with a star, is Tokyo. If you arrive in Tokyo, I recommend you book a meal at Tateru Yosino.

Two Michelin Stars means “excellent cooking that is worth a detour”, according to the Guide. Restaurants with two Michelin Stars are even rarer, with only 414 worldwide according to a statistic made in early 2020. These restaurants consistently offer high-quality food and are owned by some of the best chefs in the business. There are plenty of such fine dining locations where bookings are made a very long time in advance. We all want quality!

Three Michelin Stars means “an exceptional kitchen that deserves a special trip”, according to the Michelin Guide. Three stars are awarded only to the best restaurants. There are currently only 137 restaurants worldwide that have this honorable distinction. Three-star restaurants offer the most refined cuisine and are run by famous chefs, recognized around the world for their contribution to the culinary art. It is good to want to dine in such a place at least once in your life. It’s a fantastic experience!

Statements for an overflowing optimism

The way we handle the garden says a lot about ourselves

Cleaning of lymph and blood from toxic compounds